How Xerography Came to Be 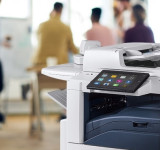 It’s amazing to think about how much we rely on xerographic technology and the ability to produce an exact copy at the touch of a button. It’s so ingrained into our lives and work processes; we can’t imagine being without it.

Xerography, which started the office copying revolution, was born in a small laboratory on October 22, 1938. It was the inspiration of a patent attorney, Chester Carlson, working in his spare time on his ideas for a duplicating breakthrough. Xerography means ‘dry writing’ and was the first process for creating a duplicate in a dry process without the use of chemicals.

The first image was a handwritten note that simply read “10-22-38 ASTORIA” (see picture). This copy is preserved in the Smithsonian Institution.

Xerography is based on two natural phenomena: that materials of opposite electrical charges attract and that some materials become better conductors of electricity when exposed to light. Carlson invented a six-step process to transfer an image from one surface to another using these phenomena. The six steps are charge, expose, develop, transfer, fuse, and clean.

Visit Chester Carlson and Xerography or download the Story of Xerography to learn more about the details of each step and how it was discovered. It’s an interesting story of struggle and rejection. And of a company named Haloid Xerox, later to become Xerox Corporation, which risked it all when it had little in order to see xerography succeed.

While xerography was invented in 1938, it wasn’t until 1959 that the first convenient office copier using xerography was unveiled by Haloid Xerox. By the time of Chester Carlson’s passing in 1968, the whole world was making copies at the push of a button.

To learn more about innovations that have evolved from xerographic technology, visit Innovation at Xerox.

Notice as you go through your normal workday, how xerography helps you and your business every day. Thank you, Chester Carlson!