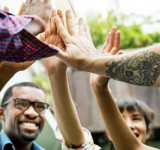 Social Media can keep you up-to-date and informed on all things Xerox.  We are in the age where information travels worldwide at what seems like the speed of light. Social media has “blown up” in the last 16 years with the founding of LinkedIn on May 5, 2003, Facebook on February 4, 2004, the launching of YouTube in February 2005,  the creation of Twitter on March 21, 2006, Instagram was launched on October 6, 2010, just to name a few. Blogging is the granddaddy coming into its own in the early 1990s. Xerox is being proactive in trying to connect to you, our customers, through many different forms of social media that you use and enjoy.